It is a controversial topic whether the ‘post-war globalization era’ which started roughly after the 2008 global crisis and is still ongoing, leading the world economies to a harmonious equilibrium or is pregnant to conflicts and chaotic events. As Carl Jung have stated, “The greater the contrast, the greater the potential” so it is important to analyze the phenomenon using both heterodox and mainstream economists’ views upon the matter. This paper’s aim is to analyze the ongoing path of globalization and its possible economic and social consequences.

After the globalization waves of 19th and 20th centuries took place, nation states gave their places to modern states and the world have become a sole, centralized region where mobility of people and capital is all time high. A considerable number of experts mentioned that in the 21st century, where the integration and ‘dependence’ of the world economies on each other are at their peak , there will be no borders. Well, it turned out it is not the case since there have been warnings about the fall in profitability rates in the advanced, capitalist economies, urging that the current globalization wave diverged from the right path. 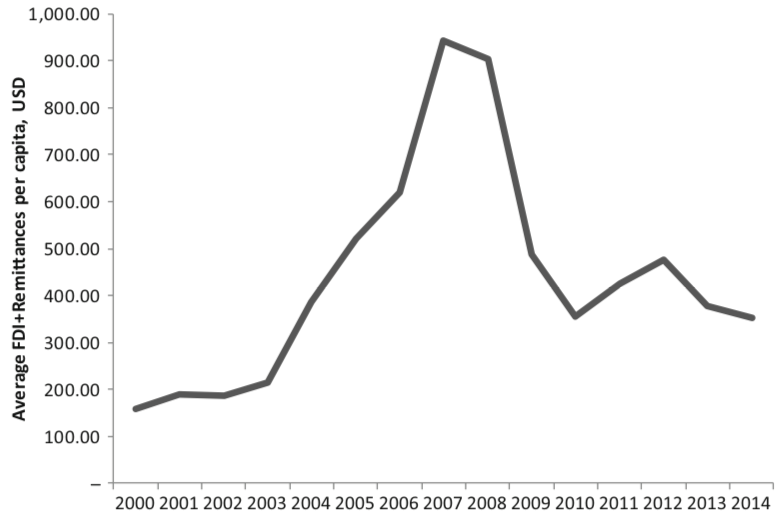 As seen in Figure 1, which indicates the changes of foreign direct investments (FDI) in USA between the years 2000-14, the amount of FDIs is in a declining trend since the 2008 global crisis, after a sharp increase between 2000-2008 where profit rates were increasing remarkably as well. The fall in profitability rates is a new trend and affects a large number of advanced countries such as US, Germany and Japan. The phenomena of falling profitability rates is a sign that; much of the profit gains are already ‘ripped-off’ and industrialized nations of 21st century are under the threat of either low, stagnant or negative profit rates. Unfortunately, low profitability rates(LPR) are not just bad news for capitalists and the ‘crème de la crème’ but for the lower classes as well. LPRs and high levels of debt accumulate in low investments which turn out to be low wages for the working-class. LPRs are directly related with low wages and are signs that levels of GDP, globally, is on a stagnant or declining trend. 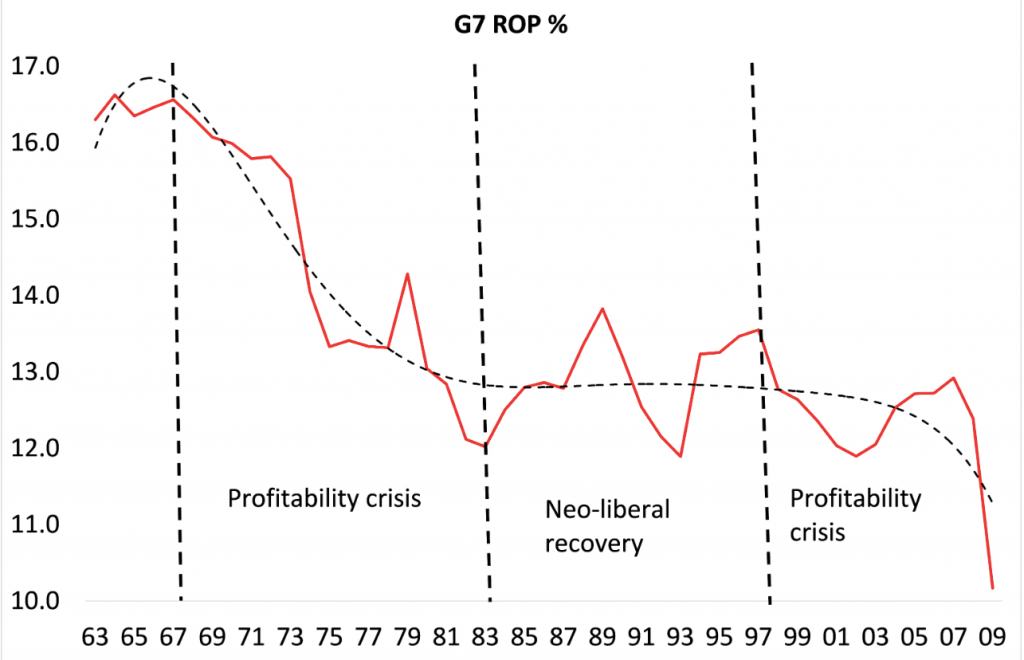 As seen in Figure 2, Roberts, who defines himself as a Marxist-economist, analyzed the rate of profit of G7 countries between 1963-2009. As Robert puts it, there are periods in history that can be named as ‘profitability crises’, triggered by series of other economic or social events. The profitability crises in the graph both took place during such critical times as the recession in 1980s and pre-economic crisis in 2000s. It can be said that, by contrasting the two figures, the world economy is on a slowing trend and whenever there are LPRs and a fall in FDI and GDP levels, a crisis occurs. So these indicators could be precursors of an upcoming economic crisis, in other words, as economists from heterodox traditions put it, chaos.

Another phenomenon of the 21st century globalization is wage inequality. The expanding gap between the extreme poor and the rich is wider than ever and the middle-income class squeezes in between. In the 21st century globalization, wage inequality is a hot topic that has the potential to cause minacious, chaotic situations as heterodox economics suggest. In order to emerge victorious from the cutthroat competition, which is a consequence of high integration of the world, monopolistic firms are backed up by governments which leads to decline in business dynamism and productivity and most importantly, decrease in share of income paid to workers. The problem arises from the fact that too much market power, being in the hands of too few.

The word ‘inequality’ became one of our daily language but why ? Weren’t there any inequalities in the 19th and 20th centuries too ? The answer is yes, there were, but not as severe as right now. The reason is that the 19th and 20th centuries were the eras of industrialization where there was a high demand for labour whole around the world, mostly in industrializing countries, and supply met with demand. There were no robotics involved as they are now and productivity was booming. The legacy these efforts left on the 21st century is all about ‘de-industrialization’ and ‘crises of over-production’.  Firstly,  deindustrialisation is generally conceptualised as a fall in manufacturing as a share of total employment.

Figure 3 shows the comparison of employment and value added trends in UK and in Korea. Both of the graphs show that manufacturing employment shares, in other words share of industry in GDP, are on a declining trend since the late 20th century. The outcomes of this phenomena are increasing financial output, loss of jobs and rises in unemployment and wage inequality rates. In such a world setting, where finding jobs is getting harder everyday, “Either poor countries will become richer, or poor people will move to rich countries” (Milanovic, 2012). Mass migration is inevitable under these conditions and even by now, there are high numbers of ‘seasonal workers’ that travel miles to work for a couple of months and become unemployed again. So the de-industrialization and the crises that are caused by the over-production of the countries which have already completed their industrialization period are mentioned by various heterodox economists as “the inherent problems of capitalism”, which are amongst the facts that mainstream economists disregard. Worsening income distribution and falling middle-class incomes are just a couple of the vast consequences.

All of these economic consequences of the 21st century globalization turn out as a backlash to the world economy and to the people. The term ‘Nation States’ are slowly coming back, protectionist measures are being adopted by countries and extraordinary nature events are taking place, which directly validates heterodox economists’ assumptions. Figure 4 shows data for labour migration to Canada between 2000-12. It can be seen that there is a constant increase in temporary foreign workers, which prove the abovementioned ‘seasonal workers’ hypothesis. Since a majority of the so-called ‘temporary’ workers are from poor countries, they get caught in the nets of populist politicians which actually changed the dynamics at the borders of countries. As Milanovic stated, border protections are constantly being increased against migration and are actually one of the sources of inequality.

Despite the lucky portion of people who get to find jobs as temporary workers, there is a high number of people who not only remain unemployed but also cannot leave their countries. On the contrary to the mainstream economics where the 21st globalization is seen as a way to a harmonious equilibrium, it can be said that in 21st century capital is mobile rather than labour, which is trapped within national borders. As time passes, these migration waves pave way to the rise of protectionist and nationalist movements and populist politicians and borders protections are getting more strict every day. As Milanovic puts it, we have a globalization of capital but a localization of labour.

Throughout the 3 waves of globalization, there have been excessive pressure on natural resources and climate. There are a lot of controversial remarks that the viruses and the pressures on climate are the reasons of extraordinary crises and are the foremost factors that are responsible of decline in global productivity.

Finally, Nikolai Kondratieff associated the global economy to a life of a plant. There are sharp rises in inflation and wages and profit rates extend, prices increase and interest rates rise as a plant does during springtime. Diminishing returns arise and technological developments start to falter during summer. A plateau is introduced with almost no growth and countries reap off the profit they made before. In winter, diminishing returns and phenomena such as demolition of all ideas and products come into play which is referred to as ‘creative destruction’. These ‘seasons’ take place within 50 years or so according to Kondratieff. From this perspective and as seen in the figure 5, the new era of globalization will either be spring or winter where all the global economic system collapses, aka, crisis and chaos. From Schumpeter’s point of view, creative destruction spurs innovation and development which necessitate destruction of old regimes.

As a final remark, considering all the above mentioned reasons, it can be said that the 21st century globalization wave is just like the term ‘casino capitalism’ where global financial system is actually working like a casino. Short termism and speculation and herd behavior in the markets lead to boom & bust cycles with having little to do with performances. It can be said that the world order and the financial systems under the current conditions is unstable and ‘extremely vulnerable’ as a month-off for the markets could mean literally chaos all around the world since all the countries are ‘interconnected’ with each other, which can be the slogan of 21st century. Economic shocks, recessions, stagnations even depressions are things that come and pass and can be considered as a part of the ‘creative destruction’ process, nevertheless, deadly viruses, climate migration, crises due to extraordinary nature events are ones that cannot be controlled and have the potential to be ‘destructive without creating’. In such an integrated world, centralized governments should take consolidative roles and global responses should be developed to the things that can be controlled, otherwise winter period will be prolonged due the things that cannot be controlled. 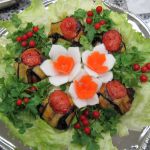 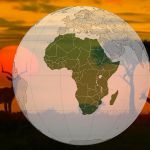