IN THE MIDST OF SHALLOWNESS, ON THE CUSP OF A VORTEX

The worst form of mediocrity has widely infected the global society just like the pandemic caused by COVID 19 and its mutants. Whether this is a side product of ‘informational revolution’ is yet to be thoroughly analysed.

It is still at its creeping stage and likely to exact higher toll in different manifestations of governance. Populist politicians continue to reap the benefits of ever widening lower-than-mediocre segments of their societies, thus churning utopias for their grassroots, and creating dystopias for many not only in their countries but throughout the globe. The global village is now in shambles.

‘Shallowism’ has become the trademark of domestic and international scenery. And worst of all the intelligentsia, academia, media, institutions etc. have, intentionally or undeliberately, become victims of it. Some even have chosen to fall in love with their executioners for their parochial individual interests. Pluralistic democracy is receding, fundamental rights of freedom are at stake, individual liberties are in jeopardy. That ambience lurking behind the scenes and penetrating polity and society has yielded varying regimes challenging democracy, thus promoting autocracy on a wide scale.

The world community  witnesses different leaders personified by such persons as Trump, Putin, Modi, Bolsonaro, Maduro to cite a few. One can add many other names to the list including those from Europe, Africa, the Middle East, and Central Asia. Strong traces of deteriorating scenes are also seen in Turkey giving credence to the  surge in populism upping the ante for restoring democracy and challenging the Republican traditions writ at large.

A  glimpse of crises-ridden geographical directions around Turkey is worth reflecting upon, as follows:

To her East the incessant sectarian policies pursued by the mullah regime in Iran seeking to preserve its clout in the region and never waivering in challenging secular way of life, autocratic regimes governing  most of Central Asia looking astray towards pluralistic democracy, the strong  possibility of Afghanistan sliding into chaos in the wake of the withdrawal of NATO forces from the country, and farther away the plight of Uighurs in China adding further fuel to regional instability. With regard to Caucasia now that the Azerbaijan has reconstituted its sovereignty in Nagorno-Karabakh there might emerge a ray of hope to launch a new cooperative scheme to bring together all actors involved in the region, including Armenia, to start laying the groundwork for peace and stability by opening all lines of communications encompassing the whole region. To what extent Russia would be compliant with such a design is controversial given her attitude to preserve its clout under the guise of frozen conflicts in Caucasia and elsewhere.

To her West relations soured with Greece mainly owing to the revival of late of the Aegean issues and Greece’s unfounded ambitions relating to the East Mediterranean, not to mention the Cyprus issue. Turkey’s standing in the Balkans started to lose face in comparative terms because of her recent ideological stance rooted in political Islam. Relations with the EU deteriorated on mutually committed mistakes which culminated in alienation of Turkey from the EU. Bilateral relations with the US is at its lowest point as a result of primarily due to the purchase of Russian S 400 Missile defence batteries coupled with divergent interests between the two countries as regards regional challenges. Biden’s statement on 24 April 2021 on politically defining the tragic 1915 events as ‘genocide’ has been another serious blow to Turkey-US ties. Both countries will have to grapple with the implications of that unacceptable statement in the long term.

To her North despite noticeable rapprochement with Russia in recent years the existence of deep divergences of positions cannot be hidden in Syria and Libya. Turkey does not see eye-to-eye with Russia the protracted conflicts extending from Transnistria, Abkhazia, Ossetia, and still simmering problems, albeit with different manifestations, in Nagorno-Karabakh. Added to this list is the ever increasing militarisation of the Black Sea basin ensuing the Russian illegal and illegitimate occupation and annexation of Crimea and its support to separatists in the Donbas region of Ukraine. The recent flare-up between Russia and Ukraine further exacerbated the fragile situation in Turkey’s immediate neighbourhood to the North. A small misstep in that region could implicate Turkey in a serious imbroglio with long term effects.

To her South the Middle East is still scene of a boiling quagmire due to the unsettled conflict in Syria, regional challenges posed by Iran, the enduring Lebanese conundrum, the friction between Saudi Arabia/ the Gulf Emirates and Yemen, the precarious situation in Iraq, the remnants of ISIS lurking behind the scenes to  reconstitute its influence if and when an opportunity arises. Despite recent steps taken how to move forward relations with Egypt in a positive direction is still by and large a mystery.

Overarching this bleak picture is the unresolved Cyprus issue and the challenge poised by hydrocarbon reserves in the East Mediterranean. Normalisation of relations between Israel and some Arab countries is also an important phenomenon to be closely monitored by Turkey in its regional merits in the first instance.

There exists a global context now beset by strategic rivalry among the US, Russia and China which, if taken to a more conflicting stage, could create challenges for Turkey already in the midst of a maelstrom in her region suffering from her precious loneliness.

The end product of rising populism in the Turkish case is crumbling institutions, the ongoing attempts to reverse the Republican values and ideals, distancing from democracies, suppression of basic rights and liberties, faltering economy, and a steady decrease in the morals and living standards of the society. By all standards the prevailing mediocrity pumped by those in power and supported by the followers of anachronistic entities and their entourage has been gnawing large chunks of the societal and economic norms and values to the detriment of the country and its standing vis-à-vis the world.

Shallow cadres unequipped with any intellectual depth and thoughts divorced from modernity and reality are taking the centerstage to demonstrate each passing day their inability in governance. They see foreign policy as a natural extension of domestic politics and attempt to blur the delicate line between those realms just like their contemporary counterparts in different geographies.

In aggregate terms they have carried both domestic politics and the Turkish foreign policy to the cusp of a vortex. Unfortunately there is considerable wreckage in the state ship, many parts of it filled with bilge water waiting to be drained and the damage to be repaired.

Owing to persistent transgression of boundaries between domestic and foreign policies Turkey now ‘enjoys’ the dividend of ‘splendid isolation’ in the midst of an arc of instabilities and conflicts surrounding her almost in a 360 degree.  It could certainly be argued that those current crises are not solely Turkey’s own making. Granted, but it is essential to probe into and analyse the implications of policies pursued by Turkey when faced by challenges caused by those ongoing crises. Soul searching is necessary and only free minds can achieve it.

The real question is what could possibly be done to surmount the challenges embedded in that big picture shaping the Turkish foreign policy. First and foremost it should be recognised by those in power that one cannot run foreign policy at loggerheads with the vital national interests of Turkey that have been consistently pursued after the foundation of the Turkish Republic. Humiliation of the foundational principles and values is a non-starter leading to a cul-de-sac, that is,isolation par excellence .

Making foreign policy the hostage of sectarian religious circles founded by exogenous forces, which never hesitate to affront the Turkish Republic, is the recipe for disaster. That is what Turkey is facing, and that is where the origins of the existing problems reside. And it is basically for this reason that Turkey is in dire need of secularising her foreign policy without delay. Turkey’s national interests and foreign policy cannot be left to the ‘mercy’ of non-contemporary bigotry prevailing over Turkey’s foreign policy choices. In that respect, recent developments have demonstrated that those wielding power have finally come to such a conclusion in the face of harsh realities governed by national interests of other countries.

Another important aspect to reckon is to revert to institutionalism in shaping and executing foreign policy. Attempts to run foreign policy on a personal basis is a relic of the past and should exit the scene. The traditional role and functions of institutions involved in foreign policy making should be revived without delay.

Overstretch of human and economic resources involving foreign policy at odds with an already fragile and vulnerable economy to polish the domestic situation is a powerful method to enter dark corridors going nowhere. Now is not the time to further militarise foreign policy. The first step should be to consolidate the ‘perceived gains’, if any, and take a calmer position giving priority to institutional diplomacy.

With the start of 2021 one can see some traces of realism in conducting Turkey’s foreign policy. Overtures have been made to the EU to put relations on a ‘positive agenda’. Despite some attempts most probably behind the scenes to ease tensions between Turkey and the US have not produced any concrete result. Those bilateral relations are teetering on the verge of further crises if the two sides continue to follow the same pattern. Seeking restoration of ties with the majority of Arab countries and Israel are on the menu, but it is too early to predict the outcome of those efforts. A patient and consistent policy is essential to attain forward looking results with the neighbours to the South without discrimination among any of them. The ‘Fortress Region’ must be robust before reviving healthy ties lying on the outer layers.

It is with certainty that global strategic rivalry will continue among the three major powers, notably, the US, Russia, and China in the long run. Their relations with ups and downs will dominate the scene in various walks of interstate relations with ramifications for Turkey. How Turkey will position herself regarding global and regional challenges and opportunities will be the key to chart her course in her foreign policy. Will it be of a transactional nature or of a well informed, predictable, and reliable one deriving its strength from its established norms, principles, and traditions remains the question. 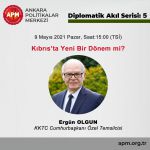 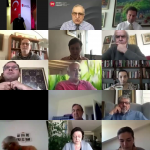